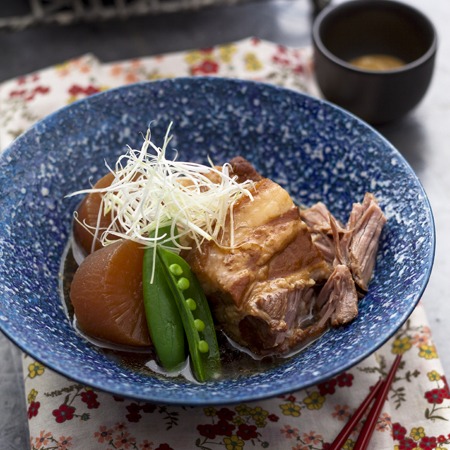 Japanese cuisine has a great variety of dishes and regional specialities known as Kyodo Ryori which originate from their respective locally grown ingredients and traditional methods.

Kyushu is southern island of Japan. Kyushu’s great climate means it produces one fifth of Japans agricultural goods. It’s also known as the Food Island, and is famous for fresh seafood, mackerel (which you can eat raw), nori from the Ariake Sea, green tea, jidori (free range) chicken, kurobura (black pork) and shochu. And there are also many beautiful hot water springs called Onsen!

In this hands on cooking class, you will be served a complimentary drink and nibble on your arrival. Atsuko will introduce you the delicious recipes and histories from Kyushu where she has grown up. Let’s enjoy cooking, eating and drinking shochu!

A type of Nabe (hot pot) dishes where a selection of meat and vegetables are simmered in a large pot. It is usually cooked and served right on the table, sharing with family which means perfect dish to be enjoyed when the weather is cold. Fukuoka’s famous hot pot consists of chicken stock, chicken and vegetables, served with ponzu (citrus soy sauce).

A traditional celebration sushi of Shiroishi town where is famous for rice fields. This recipe has been sustained for over 500 years among the locals. First prepared by farmers as an offering to the local lord of the Suko region.

Buta no kakuni 豚の角煮 in Nagasaki

Buta no Kakuni is a braised pork dish which literally means “square simmered”. The origine of this dish is most likely Chinese dish as Nagasaki has long been an important trading port in Japan since 16th century, and because it is where Eastern and Western cultures mix, you will find many varieties of food there.

A locals’ favorite vegetable dish for its simplicity ever since.  It’s been told that this dish was created at the request of the 6th Hosokawa Lord of Kumamoto. As part of a thrift ordinance put into effect to refinance the province, the Shogun demanded an economical and tasty side dish for his sake: so came this dish.

Drink: Served with Shochu (distilled alcohol) selected one type of shochu from Kyushu. Served in 3 ways: on the rocks, neat, or diluted with hot/cold water (it is common way in Japan to bring out the flavours)